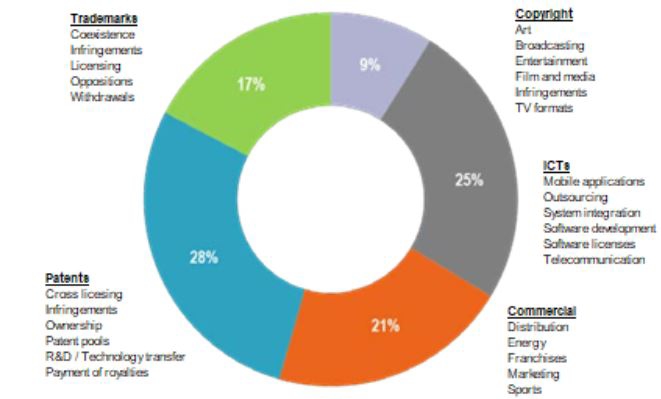 Given the number of disputes that arise every day, related to the application and interpretation of several national and international regulations on intellectual property matters, great efforts have been made to develop and facilitate the resolution of said conflicts thanks to a broad range of alternative mechanisms without the need to resort to courts.

The Alternative Dispute Resolution Mechanisms (ADRMs) include: (i) mediation, (ii) expert’s decision, and (iii) arbitration and these are the tools used by the World Intellectual Property Organization Arbitration and Mediation Center (WIPO AMC) for the resolution of disputes in intellectual property matters, and offer several options to Intellectual Property Offices (OPIs), courts and other entities (that manage disputes in intellectual property matters) interested in promoting and integrating ADRM procedures in their activities.

One of the most important aspects to always keep in mind is the intimate correlation that exists with the current local regulations, given that it is a core component, not only for the substantive and procedural implementation of these mechanisms, but also for the success of these measures and, even more importantly, the direct benefit of users that require certainty in their commercial litigations.

ADRMs have become more relevant since they offer direct commercial advantages to those involved, which are not only measured in numbers but rather a more personalized service given that it contemplates a wide variety of legal spheres and industrial sectors.

Mediation is a “procedure in which the parties in conflict request a neutral third party, the mediator, to help them negotiate a solution for their dispute in a mutually satisfactory manner”.

Mediation has many peculiarities, one of the most important being that it is a volunteer procedure, that is to say, it can only be carried out if the parties request it so. This is important since it is thanks to this peculiarity that the sole objective of mediators is to advise, after having listened to the points of each party through a series of questions for the parties to be able to reach a solution that is beneficial both for their personal and commercial interests.

In this case, mediation is especially adequate for disputes in which the parties can benefit if they share the disputed intellectual property rights and wish to keep the existing commercial relationship.

The expert’s decision is one of the most peculiar procedures that the WIPO AMC has, given that it can be defined as “a procedure by which a technical, scientific or commercial dispute among the parties is presented before one or more experts for a decision in this matter to be issued”.

In this situation, the expert’s decision shall be binding on both parties, unless they decide otherwise. “The expert’s decision is adequate for disputes that involve technical matters, such as the valuation of intellectual property rights, the interpretation of claims in patents, and the scope of the rights covered by a license”.

In this type of dispute, an early and neutral evaluation is required, given that it will be designed to facilitate the negotiation between both parties at an early stage.

In this process, both parties will submit their dispute to the expert for an evaluation of the result and of the potential costs in the event that the dispute proceeds in the courts of law.

The non-binding evaluation of the case by the expert may encourage the parties to proceed with the negotiation to resolve the dispute, which significantly increases the benefits for those involved.

We can find arbitration as a third-party ADRM employed by the WIPO AMC, which is “a private allocation system whereby the parties agree to submit the dispute arbitration court of their choice and acknowledge that the court’s decision shall be irrevocable and binding”.

On an ascending scale, arbitration is the highest level, and it is necessary when, having gone through the previous stages, the parties fail to solve the dispute by themselves and seek a conclusion, both definitive and unappealable, to their dispute.

As can be seen, ADRMs constitute a tool that shifts the paradigm of traditional justice delivery, both on a domestic and international level. These become increasingly fundamental parts of the access to a level of justice in which the will of the parties, or so-called Autonomy of the parties, turn their agreements into covenants that carry the legal force of a judicial determination and not only by word of the intention of wanting to comply with what has been stipulated.

ADRMs account for several procedures that are developed with multiple and marked particularities. These seek a scheme and a sole purpose at the same time since, thanks to their jurisdictional neutrality with which they operate, by means of specialized and independent knowledge of those involved, a particularly simple environment is generated. This environment is beneficial for the interests of both parties, which has the advantage of flexibility in its development and ends up reducing more time and costs than with traditional solutions for disputes.

In this sense, it is important to note that not only do times and expenses undergo changes, but one of the most sensitive points which is confidentiality is also benefited. As it is a reserved cut, it allows for more sensitive assets, such as intellectual property, to remain under the guardianship and control of their owners, which represents an added value for any company involved.

Another interesting point when analyzing the favorable perspectives of ADRMs is the lack of resources that can be filed in an attempt to stand against another party. Unlike court rulings, which can be appealed, ADRMs cannot be revoked given that these contemplate an implicit will of the parties and, if these were to be revoked, this would go against the good faith that they contain. Other ADRM procedures that can benefit from the irrevocability of arbitration awards are that, for example, the solutions resulting from mediation are usually contractual agreements that can later be subject to legal proceedings. To avoid this problem, the parties may resort to a hybrid ADRM procedure, such as Med-Arb, or appoint their mediator as an arbitrator with the purpose of recording the mediation agreement in a settlement award.

In conclusion, given that it is complicated for a perfect extrajudicial dispute solution program to exist, there is still a possibility of achieving the development of systems that are more conducive to the promotion, dissemination, and expansion of ADRMs as an effective alternative for the population’s access to justice from any given territory, assuming ADRMs exponentially increase the executability of agreements. This results in the most relevant point for any party involved, which is that of having a direct solution for disputes.