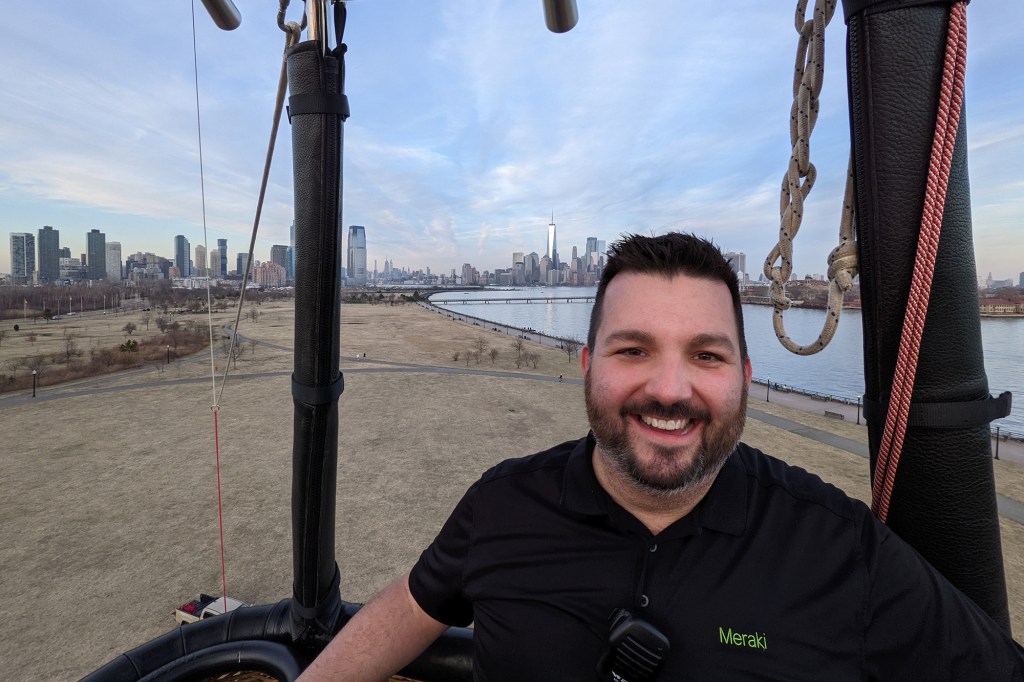 How hot air ballooning is helping this Republican win in NJ

Vinny Panico has established himself as a successful hot air balloon pilot, all while maintaining a career in sales and running a current political campaign under a Republican ticket for his local town council.

The 31-year-old hails from Readington Township, New Jersey, which is home to the annual New Jersey Lottery Festival of Ballooning — the largest of its kind in North America during the summer. He flies in it yearly and will do so again this weekend, starting Friday, July 29.

For 10 years now, Panico has soared high in the skies across America in his own colorful purple, pink and black floating vessel. Panico has also found a niche piloting commercial balloons that advertise for major brands: On St. Patrick’s Day, he did a special flyby over Jersey City for Guinness.

And his hobby has its advantages on the campaign trail, said Panico.

Although he narrowly lost a bid for Assembly District 16 in the Garden State last year, he won a primary for Readington’s town council, with the final vote coming up in November.

“When you fly a balloon, you’re not flying 30 or 40 miles, you’re flying 5 … You’re staying close to home,” he told The Post, adding that he’ll often make calculated landings in the yards and fields of constituents. “When it comes to the identity of the town, ballooning is huge with it.”

He continued: “Do I land and say, ‘Hey, I’m Vinny, running for office’? No. But a lot of times people make the connection. I’ll get Facebook messages from people who say, ‘Hey, it’s super cool you landed in my yard, good luck in November!’ and then we’ll start talking about [the election].”

Panico has also learned that flying hot air balloons has a surprising amount in common with political glad-handing.

“It’s all about being a really good neighbor … [Ballooning and politics both] allow me to go out and talk to a lot of different people. We’ve got something to talk about, something we’ve got a common bond over, locally,” he said.

Balancing his career in IT sales with his political ambitions and his hobby is actually less complicated than it appears, Panico said. “Sunrise and sunset are the times when balloon flights happen because of wind patterns, so it doesn’t interfere with your day too much.”

He discovered his passion for aviation early on. As a boy, Panico’s grandmother would take him balloon chasing, where they would follow colorful vessels that were up in the air to see them land.

In his teen years, he began volunteering at the festival, which is so massive that it “makes Readington the third-largest town in New Jersey for three days,” he said. The locally beloved fair features twice-a-day balloon flights, plus live music, rides, games and concessions. This Sunday afternoon, the old-school rock band Kansas will be taking the stage.

While working at the festival throughout high school, Panico befriended some local pilots. In turn, they helped Panico get on his feet to fly when he turned 18, but there was turbulence when he spent $10,000 on his first balloon while still living with his parents Jill and Sal.

“I had to buy it incognito. I knew that my mom would be furious with me if she heard that I bought a balloon … I was able to keep it at different people’s houses, different businesses, at a storage facility for a little before I was ready to tell my mom I made this purchase while I was still living at home paying off my student loans.”

But eventually, Panico mustered up the courage to come clean. It was after that successful negotiation that he got his first taste of politics by joining a local school board at age 21. Panico stayed on for nine years before eyeing the big races — all while flying in balloon festivals nationwide and, of course, enjoying the air close to his home of 31 years. After eight years of piloting, Panico’s mom finally joined him for a ride, he said.

And the festival continues to bring him hometown pride.

“The coming together of it is really special to me; my dad even helps me set up and when I land. It is a huge why reason I became a pilot. Going from watching it while I was younger to working it as a teen, and now flying in it, there’s nothing else like that,” said Panico.